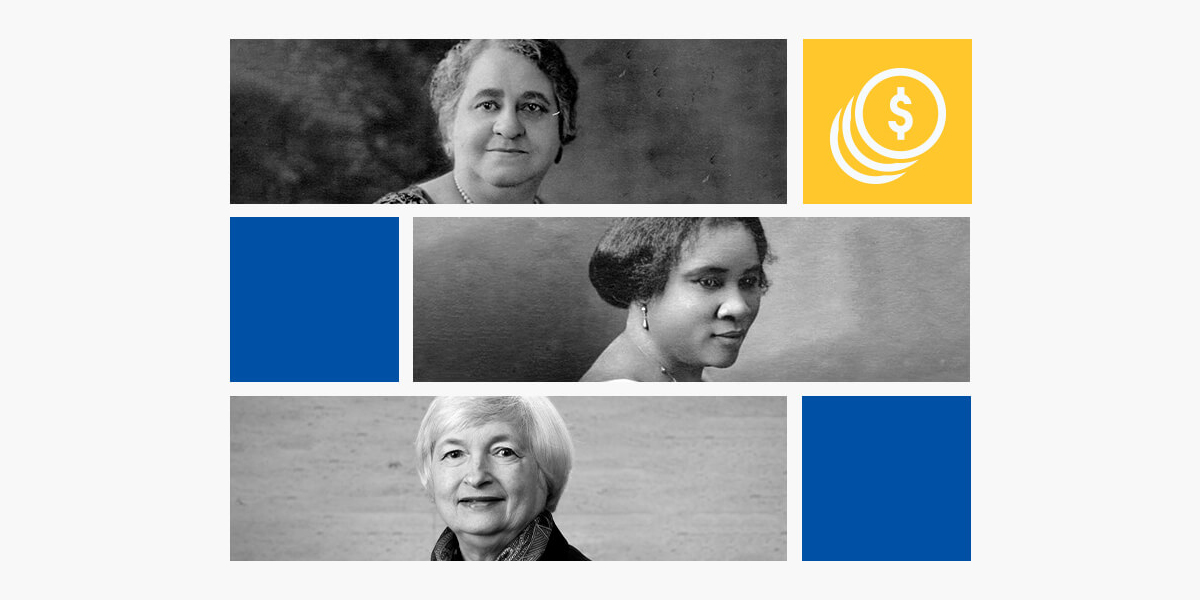 Women are more prominent in the financial services industry than ever before. But female leaders remain underrepresented in the field.

"The highest levels of corporate leadership are still dominated by men, though women have made notable gains in the past three years," according to a 2021 McKinsey & Co. and LeanIn.org report on gender and race gaps in North American financial services. It found that white men accounted for 64% of top executives across the industry.

At City National Bank, we're proud to be led by one of just a handful of women executives at the top 50 banks in the U.S.

Kelly Coffey became City National's CEO in 2019, joining the bank as only the fourth chief executive since the institution's founding 65 years earlier.

She has made a strong commitment to pursuing diversity, equity and inclusion at City National, and in 2021 the Los Angeles Business Journal named her Diversity, Inclusion and Equity CEO of the Year.

"We have increased diversity across our company, including among our most senior executives and board," Coffey said. "We currently have five women directors serving on City National's board. Additionally, nearly 60% of the executive leaders of the bank are diverse professionals."

To observe Women's History Month, we're taking time to reflect on a few notable women who have helped to shape the financial world and clear the path for those who have followed them.

Maggie Lena Walker (1864-1934), born the daughter of an enslaved couple in Richmond, Virginia, became a prominent entrepreneur and the first female chartered bank owner in the U.S. around the turn of the 20th century.

Walker joined an African American charitable organization, the Independent Order of St. Luke, in her teens and took on several high-level roles that were significant elements of her successful career.

At the organization's 1901 convention, Walker detailed her goals for the group, including establishing a savings bank, a newspaper, a factory and an emporium. That's according to the National Park Service, which noted that she wanted to foster independence and thrift among African Americans in the racially segregated Jim Crow South.

In 1903, Walker established the St. Luke Penny Savings Bank, the first U.S. bank chartered by a woman. The institution had grown significantly by 1924 and, after mergers with two other banks, survived the Great Depression.

A Louisiana-born African American entrepreneur, philanthropist and activist Madame C.J. Walker (1867-1919) founded an eponymous haircare company. More than a century after her death Walker, who amassed a large fortune, became the subject of the Netflix series "Self Made."

Born Sarah Breedlove to sharecropper parents who had endured slavery, Walker was orphaned at 7, married at 14 and widowed by age 20. She worked in cotton fields as a child and married young to escape a cruel brother-in-law.

After she was widowed, Walker moved to St. Louis, where her brothers worked as barbers. There she worked, saved money and developed friendships with other Black women through her church and the National Association of Colored Women.

Walker launched her company, which developed hair products for African American women, in 1905.

While Walker denied being a millionaire, her New York property was worth $700,000 when she died and she controlled a $500,000 company, according to Guinness World Records. That site considers her the first American woman with documentation showing she was a self-made millionaire.

Biographer Woody Holton wrote that John Adams, unlike prominent contemporaries who left behind large debts, died a wealthy man because of his wife, who is considered one of the earliest American female investors.

Holton, writing in The Washington Post, called Abigail Adams a "financial wizard" who influenced her husband's investment decisions after showing him the large gains she could realize by purchasing depreciated government bonds. When a farmer's revolt lowered government bond prices, Abigail Adams rebuffed her investment advisor-uncle's advice to sell, telling him that she and her husband instead wanted to buy more bonds, Holton wrote.

When her husband served as a diplomat in Europe, Adams persuaded him to ship home various goods, which she sold for a profit as prices soared during the Revolutionary War, according to Holton. Among her other financial feats, Adams even bargained with the local tax collector for a lower house valuation so the family could save on taxes.

Victoria Woodhull (1838-1927), who advocated for social and labor causes, including the eight-hour workday and progressive income taxes, and her sister, suffragist Tennessee Claflin (1844-1923), established the first woman-owned stock brokerage, Woodhull, Claflin and Company, in 1870, according to the Museum of the City of New York.

They also launched a newspaper focused on radical reform, Woodhull & Claflin's Weekly, which in 1872 became the first publication to print "The Communist Manifesto" in English.

The sisters' unconventional family background contributed to their adult wealth. As children, they became part of their "snake oil salesman" father's projects, making money as tent revival mediums and clairvoyants, according to the Brooklyn-based museum.

In 1868 the sisters moved to Manhattan and connected with railroad magnate Cornelius Vanderbilt. Victoria organized seances to offer Vanderbilt business advice from the "Great Beyond," while "Tennie" worked on healing, according to an account on the museum's blog.

The sisters opened their brokerage with Vanderbilt's behind-the-scenes financial support. Victoria said she went to Wall Street not out of interest in becoming a stock broker, but to "plant the flag of women's rebellion" in North America.

Born in 1946 in Brooklyn, economist Janet Yellen became the first woman to chair the Board of Governors of the Federal Reserve System, which oversees U.S. monetary policy, and the first woman to serve as U.S. Treasury Secretary, the cabinet position that she currently holds.

Yellen, who chaired the Fed from 2014 to 2018 and became Treasury Secretary last year, is the only single individual to have overseen the Fed, the Treasury Department and the White House Council of Economic Advisers.

As president of the Federal Reserve Bank of San Francisco in 2004, Yellen noticed a housing price bubble, and helped manage the financial crisis that resulted when that bubble burst four years later. Upon nominating her to the treasury post, President Biden cited Yellen's focus on unemployment and "the dignity of work."

After earning a Ph.D. in economics from Yale, Yellen held various teaching positions and worked as a Fed economist before joining the University of California, Berkley's Haas School of Business faculty in 1980. She served as a business and economics professor there for many years before becoming professor emeritus.

Yellen met her husband, fellow economist George Akerlof, in the Fed's cafeteria in the mid-1970s.

Rosemary McFadden became the first woman president of a U.S. stock or futures exchange in 1984, when she was made president and CEO of the New York Mercantile Exchange (NYMEX). She had started her Wall Street career as a staff attorney there just a few years earlier.

McFadden became a global leader in the energy sphere and NYMEX grew by 70% annually under her five-year leadership, becoming the largest energy exchange globally, according to profiles by Rutgers University — where she studied business — and the Futures Industry Association.

McFadden changed oil pricing by setting up the NYMEX's crude oil options contract as a trading benchmark, TheStreet noted. McFadden told the site she'd like to see more women in corporate suites and in top elective offices, and wanted women to enjoy parity on Fortune 500 boards.

In 2017, McFadden was inducted into the FIA's Futures Hall of Fame.

Innovative, talented women clearly have progressed from times when they needed permission or "cover" from men to participate in finance and commerce. That's no small feat considering that, as recently as the early 1970s, U.S. banks could refuse to issue a married woman a credit card without her husband's approval.

The industry still has a way to go, however.

"As financial services firms plan for a return to the office," the McKinsey report said, "they need to do more to create an equal and inclusive workplace where all women, of all backgrounds, feel supported, valued and recognized for the full extent of their contributions."