2022 Economic and Investment Series: A Discussion With Fareed Zakaria 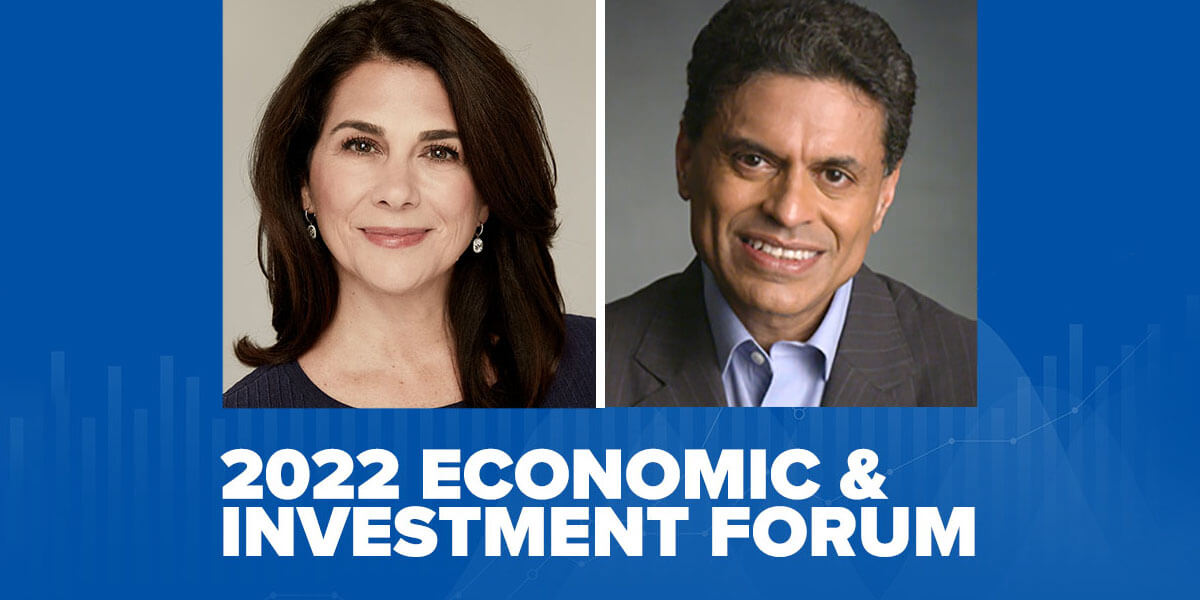 Welcome to our 2022 Economic and Investment Forum, hosted by Kelly Coffey, City National Bank CEO. During this edition of the event, Kelly welcomed journalist Fareed Zakaria, who shared insightful commentary on the economy and world events.

In the highlights below, Coffey and Zakaria discuss technology, inflation and how China and Russia impact the global economy.

Fareed Zakaria is the host of CNN's “Fareed Zakaria GPS" and is a foreign affairs columnist for the Washington Post. He's earned a following with his thought-provoking insights as an observant student of history. Zakaria uses his knowledge of history to provide interesting perspectives on current and future events.

Born in Mumbai, India, Zakaria earned his undergraduate degree from Yale and his Ph.D. from Harvard. His impressive career has seen him serve as editor of Newsweek International, managing editor of Foreign Affairs, columnist for Time, analyst for ABC News, and host of “Foreign Exchange with Fareed Zakaria" on PBS. An author of several books, his most recent, “Ten Lessons for a Post-Pandemic World," was published in October 2020.

For Zakaria, blockchain is a powerful tool that enables reliability, scalability and security in the digital space. While he believes there's a future for blockchain currency, Zakaria expresses some uncertainty about the technology's capability to replace fiat currency. He points out that cryptocurrency's association with illegal activity holds it back, making some type of regulation crucial for its adoption. With the right regulatory controls, Zakaria thinks blockchain will find a practical use in society.

Currently, inflation is on everyone's mind, and Zakaria points out that it's closely tied to globalization. While goods are cheaper when produced in other countries, Zakaria notes that many people desire for those products to be manufactured domestically. Yet once production localizes, prices for goods inflate. Zakaria points out that, for inflation to be minimized, consumers who desire locally produced products might need to settle for ones produced abroad. He warns that political rhetoric against globalized production chains could continue to drive the cost of living up for ordinary people.

Zakaria considers relations with China one of the single most significant economic and political risks for the United States. He cautions against entering a cold war with the nation, stating that a modern-day cold war would be a different situation than what played out with the USSR. This is because the Chinese economy's scale eclipses what the Soviet Union was able to produce. If the United States and China can find a way to be competitive and collaborative in the right areas, Zakaria thinks the world will be a better place.

The opinions expressed in this presentation are solely the personal views of the speakers and do not represent the views and opinions of City National Bank.

This article and presentation is for general information and education only. It is provided as a courtesy to the clients and friends of City National Bank (City National). City National does not warrant that it is accurate or complete. Opinions expressed and estimates or projections given are as of the date of the presentation with no obligation to update or notify of inaccuracy or change.

This article and presentation may not be reproduced, distributed or further published by any person without the written consent of City National. Please cite source when quoting.